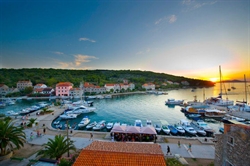 The island of Zlarin is one of the jewels of the Šibenik archipelago. It is known for corals and sponge hunters, for tourism which the islanders began to practice at the beginning of the 20thcentury, as well as for the longest waterfront in Croatia, one that is 131 meters long. Zlarin was also the place where the first tourist brochure was printed in 1922 thanks to a developed economy and Zlarin's Sons of the sea.
During the winter, there is some 300 residents on the island, but from March to October the number rises to almost two thousand. The history of the island is very rich and tumultuous, settlement has been documented there for the past nine hundred years.
Zlarin is also one of the sunniest islands of the Adriatic, it has around 2700 sunny hours per year. There is no lack of fun or events on Zlarin during the summer. In July and August there are exhibitions, art colonies, a school of dialect, a traditional feast Srdelada, a brodet making competition Brudetijada, as well as numerous art, music and drama workshops for children. There is a summer cinema for films fans, and near the island there is first class diving to be had: the remains of an ancient shipwreck from the 1st century will thrill divers.
Thanks to the fact that this is one of the few islands on which cars are forbidden, Zlarin is the living embodiment of the Croatian tourist slogan, The Mediterranean as it used to be. This has also made it one of the favorite spots for the growing nautical family.
The red coral is the island's trademark. On Zlarin people believe in its magical powers, they attribute healing properties to it when it comes to anemia, circulation,infection and infertility. The most common belief is that the red coral protects pregnant women and their unborn child from disease, infection and curses.
Zlarin is very near Šibenik. It is connected to Šibenik, Vodice and to the other nearby islands with ferry lines several times a day.